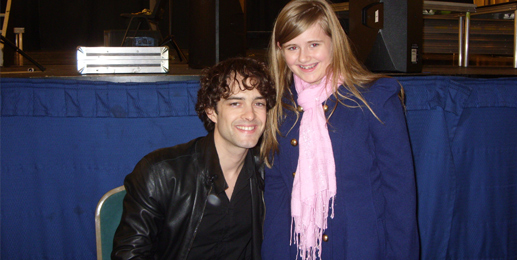 Lee Mead received an incredibly warm welcome from the people of Bath when he appeared as the special guest of the Bath Male Choir at The Forum on Bonfire Night. It was a wonderful evening of music and song put together by Bath’s Music Man – Mr Grenville Jones – who continues to delight audiences with the innovative and passionate approach he brings as the Musical Director of his many choral groups.

Also appearing at the concert were the Bristol Musical Youth Productions who gave a spirited performance singing pieces from their recent musical productions. Lee joined them on stage to perform a fabulous rendition of ‘Bring Him Home’ from ‘Les Miserables’.

During his two sets Lee premiered songs from his forthcoming album including ‘Your Song’, ‘The Garden’,‘Falling Slowly’ and ‘Better’ as well as some of his favourites from other albums. After an extremely engaging set by his charming hosts, the Bath Male Choir, Lee joined them on stage to bring the audience to their feet with a spine-tingling ‘Anthem’ from the musical ‘Chess’. In fact, so good was their rendition that Lee and the choir sang half of it again by way of an encore for the ecstatic audience!

Lee came into the auditorium after the concert and stayed for an hour signing autographs and talking to everyone, much to the delight of his loyal fans, many of whom had travelled long distances to see the show.