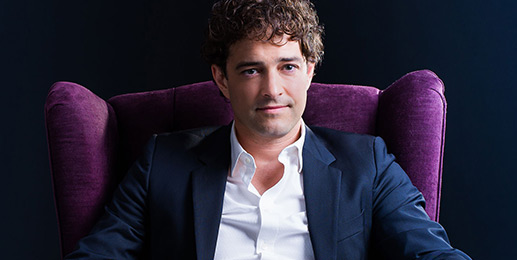 Lee Mead is celebrating - it’s 10 years since the Holby City star won the coveted starring role of Joseph in the 2007 stage revival - an event that catapulted him into the public eye. To celebrate this anniversary Lee will embark on a yearlong tour – Lee Mead – 10 Years – The Anniversary Tour in 2017/18. The first of the celebratory dates will be a Christmas show in London’s West End to be followed by dates throughout 2018. And what’s more, Lee has another treat for his fans with the release of a brand new album simply titledLee Mead – 10 Years, set for release on 23 February 2018 – just in time for Mother’s Day.

Lee Mead At Christmas- a very special show at the Harold Pinter Theatre on 3 December, will be followed by 26 dates in 2018 starting on 24 February at The Corn Exchange in Newbury, and concluding on 25th November in his home town of Southend at the Palace Theatre.

The album Lee Mead – 10 Years will feature twelve of Lee’s favourite tracks that he has performed over the years, amongst which will be show songs Dancing Through Life (Wicked), Hushabye Mountain from Chitty Chitty Bang Bang,Maria (West Side Story), Close Every Door (Joseph), As LongAs You’reMine – a duet with Rachel Tucker from Wicked, Bring Him Home (Les Miserables) along with interpretations of some contemporary numbers including Everything, With Or Without You, Leave Right Now, Let Her Down Easy, All Of Me, and Blackbird. Lee Mead – 10 Years is produced by Simon Small, whose credits include work with Michael Xavier, and John Illsley (Dire Straits)

In the past 10 years, Lee has managed to successfully combine music with stage and screen with on screen roles in Holby City and Casualty, stage roles in Chitty Chitty Bang Bang, Legally Blonde, Wicked, West End Men and of course his iconic starring role in Joseph,along with his live music tours and album releases. Lee is also a regular in Panto and took to the stage last year at the London Palladium as Prince Charming in Cinderella and this year stars at Southend’s Cliffs Pavilion in Jack and the Beanstalk.

View all the dates here or here.