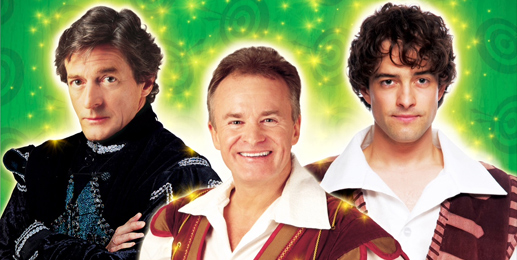 Lee Mead in Robin Hood at the Theatre Royal, Plymouth

A new legend will be born at the Theatre Royal, Plymouth, this Christmas with the arrival of the spectacular family pantomime Robin Hood. The Theatre has announced a stellar line-up of performers who will lead the cast in this year’s Christmas show; Nigel Havers, Lee Mead, and Bobby Davro.

Nigel Havers, television and film actor and one of British theatre’s biggest stars, will lead the cast as the evil Sheriff of Nottingham. He will be joined by one of the country’s most recognisable entertainers Lee Mead in the title role of Robin Hood, and comedy legend Bobby Davro, will ensure hilarity takes centre stage, in the role of Will Scarlet.

Nigel Havers is renowned for playing charming, smooth-talking characters throughout his distinguished career. He has appeared in countless television programmes including Lunch Monkeys, Little Britain, Brothers and Sisters, Sarah Jane Adventures, Dangerfield and The Charmer to name but a few. His numerous film roles include Empire of the Sun, A Passage to India and Chariots of Fire. In 2010 Nigel created the role of con man Lewis Archer in Coronation Street, which he played until earlier this year.

Lee Mead came to prominence winning the BBC talent programme Any Dream Will Do and took the lead in the West End production of Andrew Lloyd Webber’s Joseph and the Amazing Technicolor Dreamcoat. In 2010 Lee took on the role of Fiyero in the London production of Wicked. Lee has also appeared in the West End in Legally Blonde, and has recorded three albums. He is currently working towards the release of his fourth album and for September he will be appearing in his own show – Lee Mead in Concert.

Bobby Davro is a man of many talents; comedian, impressionist, game-show host and actor, having soared to fame in the 1980s with TV shows such as Bobby Davro on The Box and Bobby’s Sketch Pad, before joining the BBC to make Rock with Laughter among other hugely-popular shows. Bobby made his straight acting debut in EastEnders as the loveable rogue Vinnie Monks and has also appeared on Never Mind The Buzzcocks and Dancing On Ice, though he is most famed for his hilarious work as an impressionist.

Jonathan Kiley, Executive Producer of Robin Hood said “We are delighted to have put together such a fabulous cast for this year’s Theatre Royal pantomime. Plymouth audiences can look forward to an unmissable production packed full of action, adventure, and an abundance of comedy. Featuring plenty of glitz and glamour along with sensational musical numbers and fabulous sets and costumes, this is pantomime at its best!”

Adrian Vinken OBE, Theatre Royal Chief Executive said: “Every year our pantomime is always an important highlight here at the Theatre Royal. This year will be a bit special though because of our major redevelopment and relaunch of the theatre. So we've been looking to make this year's panto that extra bit special. We believe we've managed to do that with our new production of Robin Hood with the triple headline billing of Nigel Havers, Lee Mead and Bobby Davro. We hope this demonstrates our continued determination to bring the highest calibre theatre and artists, whether popular, highbrow or experimental, to our audiences in Plymouth and the wider South West.”

Robin Hood will be staged by Qdos Entertainment, the world’s largest pantomime producer, and the company behind the Theatre’s record-breaking productions of Dick Whittington and Cinderella. Robin Hood features the Theatre Royal’s hallmark of value-for-money and outstanding entertainment for all ages. So get ready for a sheriff-busting, arrow-shooting, tights-wearing, hog-roasting extravaganza!

Robin Hood runs at the Theatre Royal from Friday 20 December 2013 to Saturday 25 January 2014. Tickets can be booked online at www.theatreroyal.com/robin.