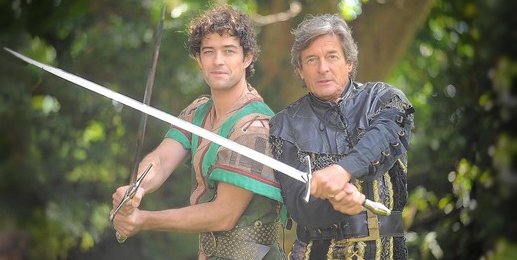 HEART-throb Lee Mead was happy to be upstaged by a horse as the Theatre Royal's panto was unveiled.
The singer and actor looked the part as he took to the saddle in the title role of Robin Hood.
​
But he admitted he'd never been on a horse before and credited the placid steed for making him look like a horseman.
"I really enjoyed it," he said. "I think I'll take up riding lessons."
His ride for the day, 14-year-old Dudley, nonchalantly munched on an ornamental tree outside the entrance to Boringdon Hall Hotel, Plympton, the venue for the meet-the-stars session.
The Irish cob, stabled at Wembury Bay Riding School and owned by Angela Mills, never flinched as press photographers snapped away and a television crew recorded the scene.

Lee had his musical theatre career transformed by winning the BBC series Any Dream Will Do in 2007, which catapulted him into the top rank of West End stars and made him one of Britain's most bankable performers.
Robin Hood reunites him with veteran TV and film actor Nigel Havers after debuting in panto in Southampton last year.
Lee said: "The funny thing is, Robin Hood was the first role I ever played, when I was nine years old in school.
"I'm looking forward to bringing my daughter Betsy (aged three) to Plymouth to see the show."
Nigel leads the cast as the Sheriff of Nottingham and relished swishing a sword for the cameras.
Jeffrey Holland is probably still best known as hapless Spike in Hi-de-Hi! despite a string of TV sitcom hits but revealed this will be his 42nd year in panto. As Nurse Till Tick, will be playing his 24th dame.
And comedian and impressionist Bobby Davro (Will Scarlett) played on his own status of notching 35 years in the business by joking: "I've got a new TV show – I'm Still Alive At The Apollo."
Robin Hood will run at the Theatre Royal from December 20 to January 25.
This year's run will break new ground on January 23 when the matinee will be a specially designated "relaxed performance" to welcome people with autism, learning disability or sensory or communication problems.

View Article in This is Plymouth

Article Credit: This is Plymouth