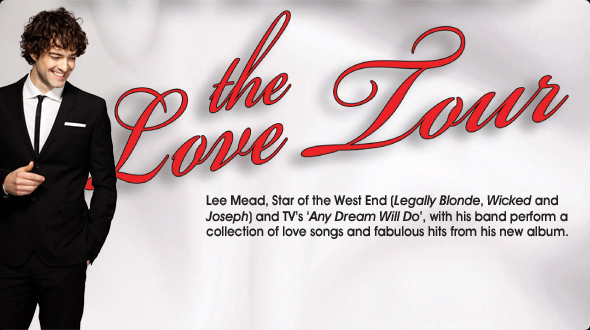 Acclaimed West End star Lee Mead will take to the road in 2012 as he embarks upon The Love Tour, an exclusive seven date nationwide tour presented by Raymond Gubbay. Lee will be joined by his talented band and West End star Louise Dearman to perform a collection of love songs and hits from his new album.

Lee shot to fame when he won the BBC’s ‘Any Dream Will Do’, Andrew Lloyd Webber’s national search to find the lead in his production of Joseph and the Amazing Technicolor Dreamcoat. He subsequently enjoyed a successful run in this hit musical at the Adelphi Theatre, which was acclaimed by audiences and critics alike.

Since then, Lee has established himself as one of the leading names in musical theatre, having played Fiyero in Wicked and more recently Emmett in Legally Blonde. Lee has also played the main role in a national tour of Oscar Wilde’s Lord Arthur Savile’s Crime.

Lee will be joined by Louise Dearman, one of Britain’s leading West End actresses who has taken lead roles in Evita, Guys and Dolls and most recently, Wicked.

They will be accompanied by Lee’s band, under the direction of Mason Neely and the varied programme will include such hits as ‘I Believe (When I Fall in Love it will be Forever)’; ‘Falling Slowly’, ‘Your Song’, ‘The Best is Yet to Come’, ‘Fix You’, ‘She’, ‘If I Can Dream’, ‘Anthem’ from Chess and the much loved ‘Any Dream Will Do’ and ‘Close Every Door’ from Joseph and the Amazing Technicolor Dreamcoat.