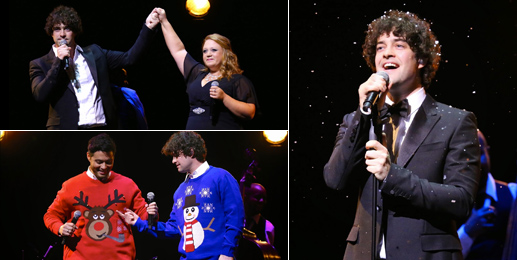 8th December 2014 - Best known for winning 'Any Dream Will Do' on the BBC back in 2007, Lee Mead has come on from strength to strength since playing the part of Joseph in the West End. With subsequent stage appearances in shows such as Legally Blonde and Wicked, Lee is now a familiar face in our living rooms once again playing Lofty in Casualty.

Having released solo albums and in his spare time from his hectic filming schedule, Lee is finding the time to put together a UK tour, with backing from his fabulous six-piece band, which culminated in a special Christmas show here at the Garrick on Sunday night.

Amongst the myriad of stage hits and festive favourites, Lee told a few stories of his past and injected humour into some of the numbers with the addition of loud and powerful snow machines, which had both himself and the audience in stitches. Singing some material from his new album, hitting the MGM era with aplomb, there was a great arrangement of 'Singin' In The Rain added into the mix.

With his first guest of the evening joining on stage, Stephen Rahman Hughes added the Christmas bling with a couple of jumpers for them to wear getting everyone in the festive mood.

But it was Lee's second guest of the night who blew us all away… Amanda Henderson. Known for playing Robyn in Casualty, wow what a voice this woman has! A beautiful rendition of Over the Rainbow (Eva Cassidy version) had the audience stunned. And later, a duet with Lee of 'Baby it's Cold Outside' showed both voices at their full strength… Bravo!

A very entertaining evening was had in the Garrick, it's just a shame that Christmas only comes once a year. Watch out for Lee doing more concerts in the future, and book a ticket as you won't be disappointed.